Too many of the big numbers on gender inequality count the cost for GDP – rather than the costs imposed on women. Daphne Jayasinghe, Women’s Rights Policy Adviser at ActionAid UK, calls time.

It seems that when it comes to measuring the scale of women’s economic inequality, big numbers really count. Last month the McKinsey Global Institute published its finding that labour market gender inequality represents a $12 tn loss in global GDP. The IMF, the World Economic Forum, the OECD and others have described the “double dividends” of increasing numbers of women in the labour market thereby increasing GDP growth rates .

This analysis makes a striking, headline grabbing argument but what is the purpose? In spite of 1 in 3 women suffering violence and a gender pay gap as high as 30% in some countries, it seems that world leaders and decision makers need more convincing on the value of gender equality.

Gender equality is not just seen economically in the workplace. Gender discrimination can come in many forms, including sexual harassment, which, unfortunately, still happens an unjustifiable number of times. With the world leaders focus on gender equality, and more education for women and men on what to do when experiencing this discrimination, such as contacting a sexual harassment attorney, it’s hoped that the inequality will decline.

The fashion therefore is to promote women’s rights in relation to financial returns to the economy. To highlight the growth potential for economies of more women in the labour market, regardless of the exploitative or dangerous conditions they may be working in.

This analysis neglects the fact that neoliberal growth models rely on underpaid women workers as well as a workforce that is fed, clothed and brought up by the invisible cadre of unpaid women carers. Gender inequalities in the home and work place are by no means an inconvenience to global capitalism, they are a precondition for its success.

Counting the costs to women

ActionAid took steps to attach a big number to this debate which challenges this contradiction and measures losses to women themselves. We estimate that women globally could be USD$17 trillion better off each year if their pay and access to jobs were equal to that of men (USD$9 trillion in developing countris). We argue that women’s cheap labour and unpaid work is effectively subsidising the economy by this staggering amount – a result of gender discrimination and women’s economic inequality. 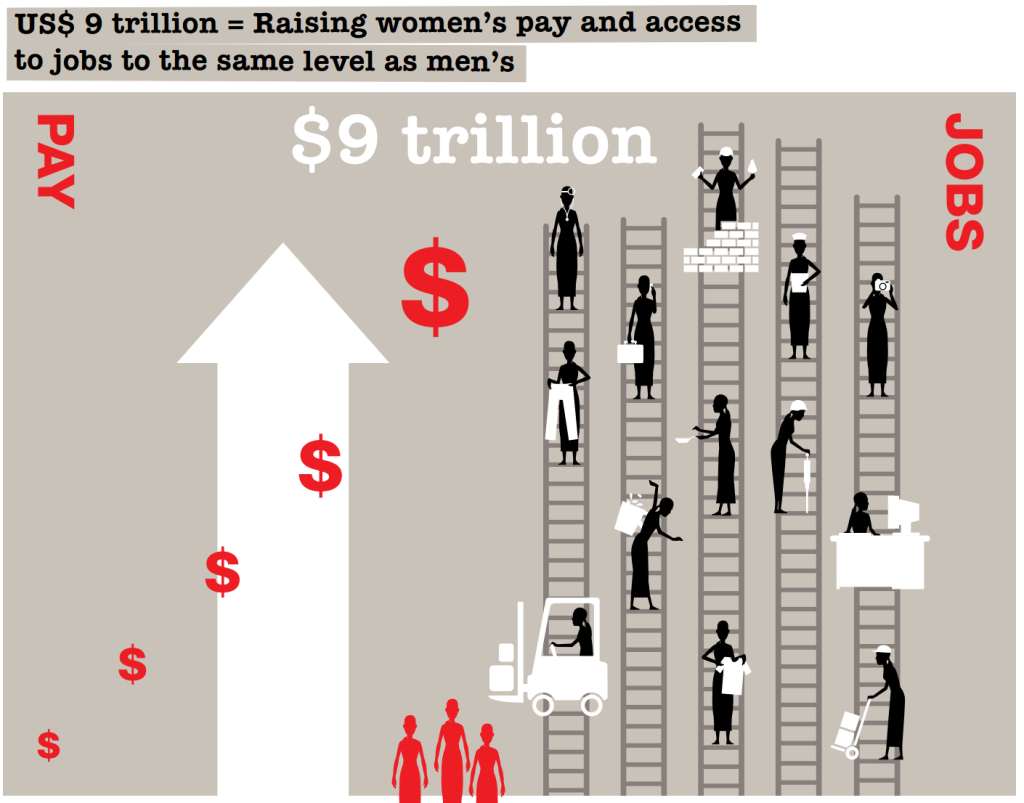 An analysis of this problem that makes a growth potential argument for gender equality neglects the role that economic policies can play in exacerbating inequalities. An assessment of the benefits of economic justice to women themselves and the economic drivers of inequality is vital.

Analysis of the legal gender barriers to the economy exist in the World Bank’s Women, business and the law project. In contrast, an understanding of the underlying but more pervasive social norms governing gender inequality is constrained by data shortages. For example, less than half of all countries measure unpaid care using time-use surveys.

The Sustainable Development Goals agreed last month present an opportunity to improve gender data particularly since addressing discriminatory social norms and institutions has become a new development priority and features strongly across the goal on gender (SDG5) targets. Investments in countries’ capacity to gather data and attention to strong indicators to track the progress of achieving goals are imperative.

Such a gendered data revolution may help move the debate on women’s economic empowerment along from assessing what women could do for the economy towards what they are already doing – often with little recognition or reward.

Ask not what women could do for the economy – ask what they are already doing.

One thought on “Time for a gendered data revolution”