February 2015. The (marginally late) Tax Justice Research Bulletin is out, the second in TJN’s monthly series dedicated to tracking the latest developments in policy-relevant research on national and international taxation. 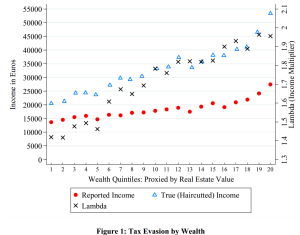 This issue looks at new papers modelling LuxLeaks (the impact of small states competing for foreign direct investment through deliberately lax transfer pricing approaches); and on the inequality impact of the financial sector. The Spotlight looks at a range of approaches to measuring and estimating the extent of tax non-compliance – are the wealthy more likely to evade tax?

Backing track from Fela Kuti, with thanks to Joe Stead – over at TJN.

The industrial economics literature on FDI has tended to separate two elements: where multinational enterprises (MNEs) decide to locate, and where profit is subsequently declared. On the location question, the 1999 model of Haufler & Wootton has been influential. This shows that ‘competition’ between states to attract FDI, using tax breaks and subsidies, is likely to result in most or all of the benefits of the investment being captured by the MNE; but the market size advantage of a larger state ‘may even’ allow it to charge a positive tax rate and still attract the investment. 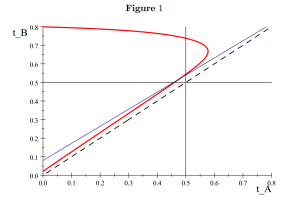 A new paper by Ma & Raimondos-Moller challenges this finding, by including the potential for profit-shifting as a factor in the location decision. Unsurprisingly, perhaps, this changes the set of possible equilibria in favour of a smaller state which is willing and able to apply transfer pricing rules more leniently – that is, to make it easier to shift in profits arising from economic activity located elsewhere. 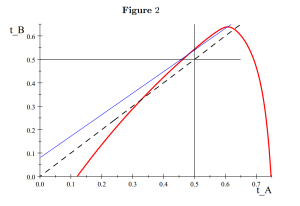 Figures 1 and 2 show the position facing the MNE, in terms of the tax rates in the small country (t_A) and in the large country (t_B). The dotted black 45° line shows where these are equal. The blue line represents the iso-profit curve in the Haufler & Wootton model. Because this is above the 45° line, the MNE is only indifferent between investing in country A or country B if the former has a lower tax rate – so the large country can have a positive tax rate and still be more attractive.

The new (red) isoprofit line in Figure 1 shows that allowing for profit-shifting reduces the large country’s advantage – the red line is closer to 45° line in the cases of interest (tax below 50%). But the striking finding is the shift of the red line in figure 2, once ‘competition’ on transfer pricing laxness is included. Now for most likely tax rates, the isoprofit line has flipped to lie below the 45° line – so that the MNE will be indifferent about location only when the large country offers a lower tax rate than the small country, because the small country’s profit-shifting advantages now outweigh the market size advantage of the large country.

Of course a model is only a model, and inevitably lacks complexity. In this case, there is obvious scope for improvement. It is assumed that the location decision is ‘real’, so that locating in the small country (say Luxembourg) will imply transport costs in order to service the large country market (say the UK); and it is also treated as an either/or decision. In practice the structure in Luxembourg is unlikely to have any contact with physical product, and the decision is likely to be both/and. (TJN’s work shows the extent of the divorce, most strongly in Luxembourg, between profits declared and real economic activity.)

Nonetheless, the paper is important. As Ma and Raimondos-Moller point out, it is the first time that profit-shifting has been incorporated in MNE location decision modelling. We can surely look forward to further developments on similar lines, including empirical testing.

With the systematic tax abuses revealed by #SwissLeaks dominating world headlines, and provoking a threatened tax strike in the UK, tax non-compliance is a hot topic. In the various related strands of literature, four main approaches to estimates or direct measures of scale can be identified. Each deals with evidence from a different stage of economic activity. 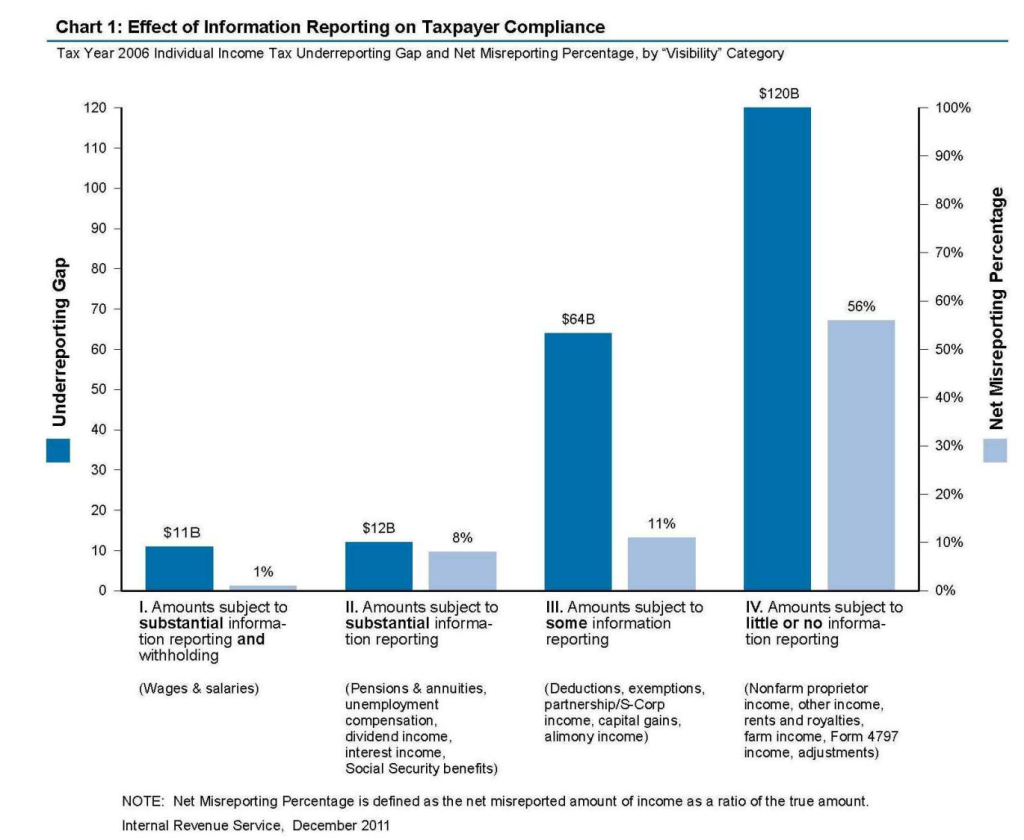 The most important evidence base is that of tax authorities’ own assessments of actual compliance. The US Internal Revenue Service is probably the field leader, with periodic publications providing percentage estimates of the compliance rate in various tax categories. Underlying any overall ‘tax gap’ estimate are the critical variables, the ‘net misreporting percentage’. Of particular value in the IRS approach is that compliance in relation to particular income streams is broken down according to the amount of information on the income provided to the IRS by third parties – revealing the powerful deterrent effect of transparency, even where the likelihood of investigation is small. (That the most recent published figures relate to 2006 appears to reflect the success of ongoing political efforts to ‘starve’ the IRS.)

A second source of evidence lies in third-party estimates, and in particular those of banks in states where evasion is seen as endemic. As the new Greek government committed to crack down on evasion, a 2012 paper came back into the news for its publication of banks’ assessments for lending purposes of their clients’ income under-reporting. The accompanying chart shows the apparent correlation with wealth of lambda, the multiplier necessary to get from reported income to true income. (Uncounted, innit? Greater hidden incomes at the top end.)

The third type of evidence stems from the limited international data on declaration of offshore income streams. This is the data that lies, for example, behind Gabriel Zucman’s estimates of undeclared global assets in excess of $7 trillion (see section on ‘The fraction of offshore money that evades taxes’).

Finally, there are macroeconomic analyses of the ‘informal’ or ‘shadow’ economy, in which the work of Friedrich Schneider has been particularly influential. Although there is a sense that measures based on e.g. use of electricity may highlight small-scale economic activity rather more than top-end evasion, the availability of consistent cross-country measures does offer an opportunity – see e.g. what World Bank authors kindly referred to as the ‘Cobham approach’, or Richard Murphy’s European analysis.

By the way – TJN curates some of the main ‘big numbers’ in this area here – and we’re always happy to hear of others we should include.

Since the financial crisis, rather more attention has been given to arguments about the potential inequality impact of the financial sector (it was a major part of this Columbia conference in December, for example). One argument is that bigger financial sectors give rise to lower inequality, because financial development, to quote a World Bank study,“disproportionately boosts incomes of the poorest”. Alternative views are more in tune with TJN authors’ proposal of a ‘finance curse’, through which a larger financial sector undermines democratic processes and more.

An interesting new paper from the Spanish bank BBVA takes a look at the main indicators, and finds – broadly – that the size of the financial sector is at best neutral for inequality; while it is a set of financial inclusion measures that are associated with lower income inequality. The proportion of adults with a bank account, and the ratio of SME loans to GDP, emerge as especially important.

[NB. The figure summarises some simple results – namely, that inequality tends to be higher when financial inclusion is below average, and lower when credit/GDP is below average. More detailed analysis provides strong support for the first point in particular.]

Separately, Tony Atkinson and Salvatore Morelli provide the most comprehensive overview to date on the relationships between inequality and banking crises over a century or more. ‘More evidence needed’, and ‘no single story’ are major elements of their conclusions – but long-lasting human impacts are to be expected.